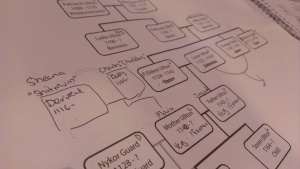 I’ve been thinking about unlikeable characters: the villains, antagonists, and characters that just walk around doing more harm than good, or those that start sounding like they have no redeeming features. Firstly, these characters have purpose. Without them, there would be no conflict, and everyone would just be fine and dandy and agree to disagree on things. But the question is: how do I make sure that these characters aren’t one-dimensional “drama-bots”?

I’ll preface this by saying that I’ve played quite a few villains in plays. So when I think about my character, or I begin to work on a bad character, I try to think about them as having real motivation behind their “evilness.” Whatever they are doing, they need to believe that it is, somehow, the right thing. They need to be justified in their bad behaviour, no matter how selfish and irrational it may appear to others. If this is a major character, then significant backstory is required. A minor character? Then motivation is generally enough, but you could choose one random event or a moment when it became their driving force.

Using the example from the picture: (spoiler?)

We nicknamed Sheena “Sh!tMum” because she’s a terrible parent, due to her marrying up and only caring about spending time with rich folk, being drunk. Her daughter despises her, but formed strong bonds with the townsfolk she spent time with. We want you to like her daughter, but she doesn’t feature much at all.